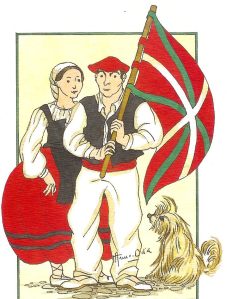 I’m back!! Back from a speedy one week holiday in the Basque Country, which is an area in the North of Spain whose sketchy history I am not going to go into. Basically, they have their own flag and language in which I can count up to twenty-nine, but they are not an independent state, although if you call a Basque person a Spaniard you are insulting their entire family tree and they will retaliate with patriotic aggression. Perhaps, this is just from my experience but nonetheless I wouldn’t suggest it unless you enjoy entering into arguments in which you can never win.

I had a pleasant trip and I did enjoy myself at times but because I’m a teenager instead of sharing all the fun I had and highlighting the good parts of my holiday, I prefer to complain about everything else. What is the point in going on holiday if you are not able to rant about it afterwards?

At the heart of every bad holiday there is a terrible travel tale and unless you own a private jet, travelling is usually a stressful, hectic and excruciatingly irritating experience. The journey there was all right, mainly because I was so tired that I slept the entire way through making it the shortest flight of my life. I dozed off so quickly that I didn’t even feel the plane taking off. However, coming back was a whole different story. Firstly, the airport in Bilbao is the most depressing building I  have had the displeasure of waiting in. There are only a few small shops, compared to the shopping centres incorporated into most London airports as a scheme to exploit the boredom of travellers, and they do not even have the decency to stay open past 10 O’clock! To make it worst, once we had boarded the plane we had to sit waiting for a whole hour, staring out of the window into complete darkness, because of “air traffic”. We were the only flight scheduled for the rest of the day due to the crazy hour yet somehow we were to suffer the result of “air traffic”, with only a glass of water and an apology to compensate for the discomfort. Then, finally, to top it all off, because the train to the terminal building decided that it would not carry poor stranded passengers past midnight and someone had the misconception that a plane full of poor stranded passengers wouldn’t mind waiting an extra quarter of an hour, we impatiently attended the arrival of a bus. I do hope I have made my annoyance perfectly clear.

Despite the popular stereotype of a holiday in Spain consisting of sunny days lounging in the beach, soaking up Vitamin D and developing skin cancer in addition to an awful sun burn, the weather was also a disappointment. It was no different from the typical British summer, a few rare days of cloudy sunshine followed by heavy showers. When one goes on holiday, to Spain of all places, one would expect to be able to enjoy the lovely sunshine however I have returned from my holiday with nothing to show for it, tan-less.

Now that I have finished my mini-rant….it wasn’t all bad. It was nice to wake up in the morning, breathe in the fresh air and look out of the window to admire the beautiful scenery of lush green mountains, instead of tall buildings along the skyline. At night I could look up into the silent sky and see tiny glimmering star, instead of aeroplanes accompanied by the sounds of loud sirens. I stayed in a quaint little village, complete with an old church and a town square, with many of its original buildings still remaining, perfect for afternoon strolls along the cobbled streets and… pictures!