Three months after I posted about my home-made vegetable garden, I was given the great honour of being Freshly Pressed. It was my first time and although I had always (less than a year) wished for it to happen I never actually believed it would. So, when the comments came rushing in and readers I had never come across before started to congratulate me I was completely baffled; pleased but baffled. Did everybody else know something I didn’t? Why was I not privy to this piece of top-secret information?

Fortunately, I was soon clued in and the reason for my bombardment of supportive and congratulating comments became clear, relieving me of my earlier confusion. Confusion that turned into absolute joy and excitement at the arrival of each comment. Each comment like the harvest of my labour’s fruit and veg, received with much appreciation and a fair amount of positive annoyance at the clogging up of my inbox. Thank you 🙂

Many of my commenters were extremely enthusiastic about growing their own produce and I’m glad I supposedly inspired some people. I guess that is something that I can proudly add to my repertoire and use in a college application if I ever feel lacking in any areas, not that it will get taken too seriously. However, one reader made a very unusual point which I feel compelled to clarify in order to keep a clean record and avoid any problems in my future political career (and eventual world domination). Although I mentioned immigration in a negative light, I would like to make it absolutely clear that this is only applicable to fruits and vegetables and mainly because of the impact it has on the environment. So, if I ever run in an election and you happen to be involved in a smear campaign against me, look elsewhere for dirty secrets and irrelevant information that can be twisted and mis-interpreted to destroy my public image and mislead my voters.

Moving away from my slight paranoia and on a more positive note, it seems there is a lot of curiosity about what happened to my garden following my Freshly Pressed post and as a few months have past there has been a lot of change. Gone are the neatly kept rows of tomatoes supported by straight standing bamboo sticks; replaced by an overgrown wilderness of green leaves and fruits fighting for space and sunlight. It seems that when planting the seeds, in an effort to economise and make the most of every single millimetre of land, not enough space for was left between the plants resulting in the appearance of the world’s first city jungle. Yet, despite the conditions the tomatoes have managed to grow and if you dare to venture deep enough, into the darkness of the bushes, you can spot the juicy glow of the first few reddened tomatoes.

The sweetcorn has also greatly flourished, but in a much less chaotic way. Each plant has produced a few cobs and they all look ready to hit the barbecue, if only it would stop raining. Without a single hint of bias, I can honestly say that the sweetcorn from my garden is the best I have ever tasted; sweet and juicy even when eaten plain and raw.

As for the strawberries in the hanging basket… At first they produced a few tiny sweet strawberries but as time went by and the weather grew worse they withered and died, only to mysteriously start growing what appears to be green tomatoes! I am not yet sure as to the origins of these magical fruits and will need to do some further investigation to ascertain the cause but I have a small inkling that my father may be behind it. 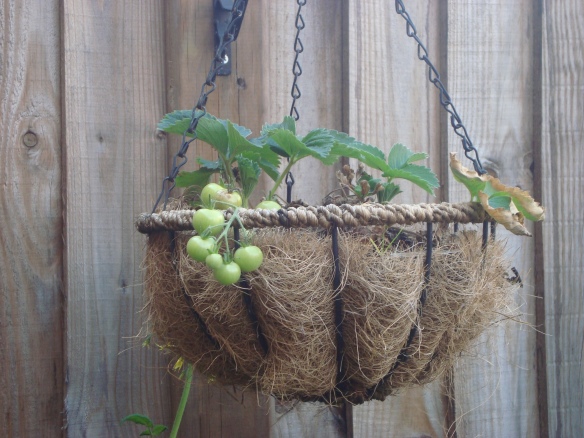 Let’s hope that everything continues to go well and perhaps next year we can learn from our mistakes and avoid any unfortunate repeats. Everyone starts off with black thumbs to begin with; they just get greener and greener with practise.

15 thoughts on “There’s a jungle growing in my garden”