This afternoon, I was out shopping on Oxford Street with my sister and as is the norm the place was packed with shoppers, many of them tourists. I bought a periwinkle cardigan and black harem trousers and tried on a few maxi dresses but because I am incredibly short, those were left behind. I was happy with my purchases but they were not the only things I brought back with me.

Somewhere in between one shop and another, amongst a throng of people walking past each other, one stopped and handed me an object. It was unexpected and my automatic response was to take it. I hardly had time to look at the curly-haired woman who gave it to me and did not look at the object itself until she was gone, leaving my sister and I in a state of confusion.

Here is what she gave me: 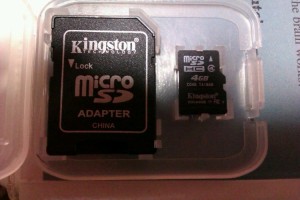 After we had gotten over the initial surprise our thoughts naturally turned to the worst conclusions. My sister thought that it might be a computer virus and I thought that it might be the stolen data of a major corporation or bank that had been hidden with an unsuspecting stranger who know one would suspect (me), to be collected at a later date. Neither of us thought, maybe it could be a….I can’t even think of anything positive that it could be.

I’m wondering what other people would think in the same situation. What do you think is on the SD card? I’m not going to dare to find out but I’d like to read your thoughts.

6 thoughts on “Why do we always think the worst?”