During my short holiday in Spain, I enjoyed an afternoon out with my mother in the small city of San Sebastián. It’s a beautiful city in the north of the country that is a popular tourist destination because of its picturesque coastline and lively atmosphere. There is always something to capture your interest, whether you’re exploring the local shops and restaurants, snoozing on the beach or cruising the waves. Even just sitting on a bench and watching the people go by can be a source of entertainment. (A.K.A people-watching)

With so much going on around me and so many interesting things to see it was also a great opportunity to capture the moments using my trustworthy camera. Walking around like a first-time tourist in a city I had visited many times before, I had fun discovering San Sebastián and recording my excursion, following a theme of contradictions or paradox. It was not my intention to begin with; my finger reaching for the snap button was simply an automatic reflex responding to my fascination; but somewhere between the snaps and flashes the coincidental theme emerged and I fully immersed myself into it.

The most obvious contradiction/paradox was land and sea. The coastal city is outlined by hills and mountains and on a good sunny day its three beaches are swarmed with people soaking up the sun and small boats and canoes decorate the sea bay. There is also a small island (Santa Clara) that we took a boat tour of despite my mother’s obvious preference of land. She bravely ignored the unsettling swaying motions of the boat that brought a clenching to her stomach and was rewarded with the most amazing view. 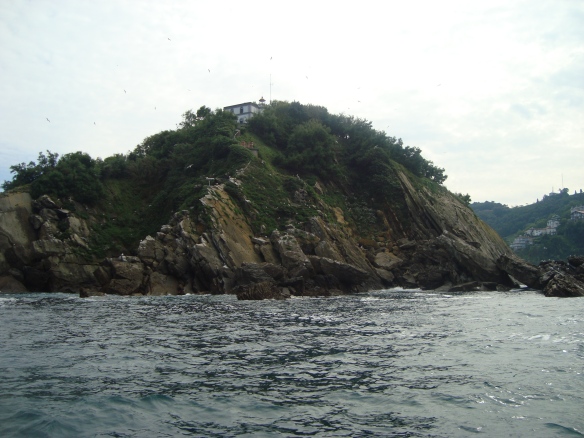 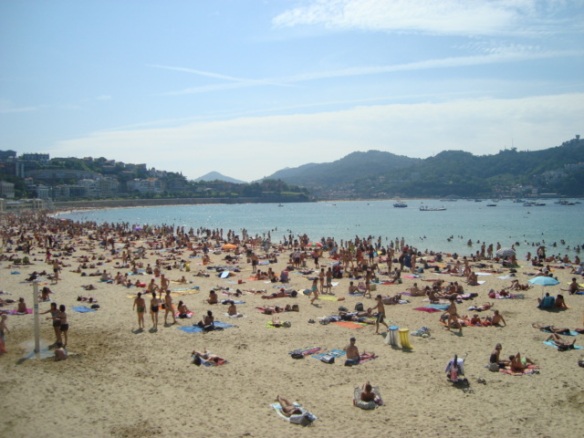 Old and new is another paradox that is a prominent feature of San Sebastián. Although it is a modern metropolitan city and you could easily spend your day shopping for the latest trends at H&M before stopping for lunch at McDonald’s, you could just as easily travel along narrow cobbled streets, from bar to bar, trying traditional tapas and fresh seafood in the “old part” (Parte Vieja) of the city. Most of the buildings in the Parte Vieja trace back to the 19th century and much of its original architecture has been kept the same creating a stark contrast between the old part at the core of the city and the modern area that surrounds it. 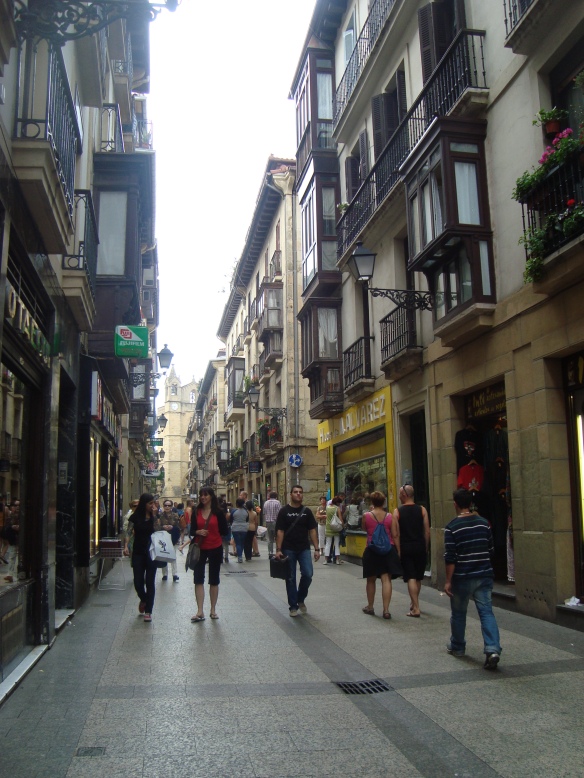 As we wandered along the city harbour, the sound of drums alerted us to another unusual contradiction. We followed the loud beating to a small crowd encompassing a group of uniformed, drum-bearing  children. They were celebrating a festival, dressed in Basque clothes and playing traditional Basque instruments, but instead of the expected Basque flag, we were surprised to see the Libyan flag carried proudly by a small Libyan boy. It seems support for the Libyan people is wide-spread and not contained to just the neighbouring Arab countries.

Finally, here is the picture that started off my entire theme of contradictions and paradox. Imagine our amusement and confusion when my mother and I walk into a bakery full of sugary treats to find a public weighing scales with a sign that translates to “observe your weight” right next to the large slabs of chocolate. Is this meant to be good for business or is it a new government initiative? I’m not sure what it says about the Basque people’s eating habits but it says a lot about their sense of humour.

Overall, I had a fantastic afternoon of “mother-daughter bonding” and can not wait to go back to San Sebastián and perhaps have a look at some of the museums and places I didn’t get a chance to see. San Sebastián may not be as well-known and popular as other cities in Spain such as Barcelona or Madrid but nevertheless it is a superb place and definitely worth a visit.

23 thoughts on “San Sebastián: A city of contradictions”